← more from
In The Red Records
Get fresh music recommendations delivered to your inbox every Friday.
We've updated our Terms of Use. You can review the changes here.

Summer Forever And Ever 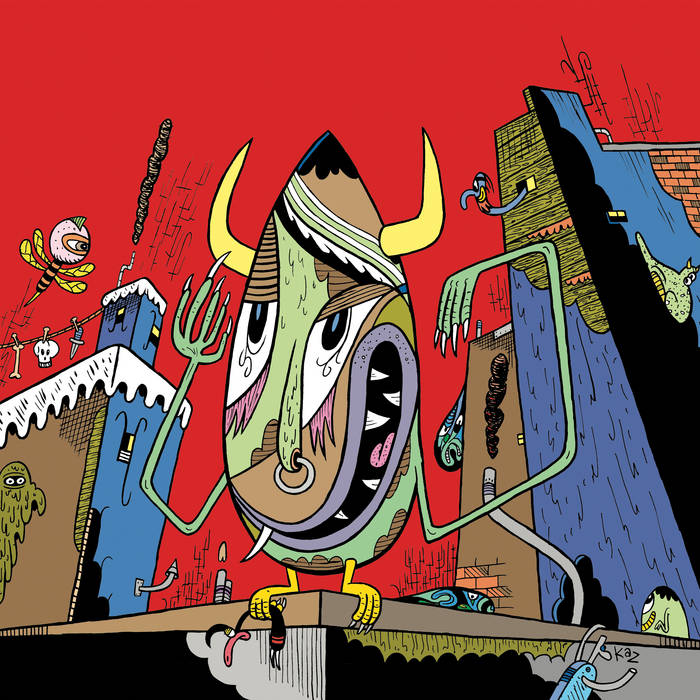 Summer Forever and Ever succeeds Blue Gene Stew, 2019’s debut by the Wolfmanhattan Project, a collective unit co-starring two other musicians familiar to In the Red listeners: singer-guitarist Mick Collins, front man of the seminal Detroit-bred garage units The Dirtbombs and The Gories, and drummer-vocalist Bob Bert, whose skin work has distinguished albums by Sonic Youth, Pussy Galore, Lydia Lunch’s Retrovirus, and Jon Spencer and the HITmakers.

Powers says of the genesis of the Wolfmanhattan Project, “I met Mick at the South By Southwest Music Conference in Austin. There was just a great vibe from him, and I admire him so much. I said, ‘We should do something together someday!’ Bob is a mutual friend of ours, and he actually pulled it together by saying, ‘Hey, let’s go in the studio.’ We had a rough concept of two baritone guitars and drums, with all of us singing. It ended up that I found a baritone guitar and no one else did, so I became the default ‘bass player.’”

Bert recalls, “It’s unbelievable that the Wolfmanhattan Project has been together for 10 years at this point. I went to a show at the Brooklyn Bowl, and Kid and Mick did a song together. I have to give Larry Hardy the credit for almost curating the band, in a way. I heard they were thinking about recording, and I happened to be in L.A. hanging with Larry, and he got a call from Mick, and I said, ‘Oh, I wanna get in on that.’ I’ve known Mick and Kid for a really long time, so it all kind of fell together.”

The group was founded as a studio project by three musicians who are kept busy by their primary bands. Blue Gene Stew was written and recorded quickly. Powers says, “I think that the new record was much more a group effort. I think there’s more of a group kind of sound, as eclectic as it is. I feel like we all played together, as opposed to playing on each other’s songs.”

Bert notes that the band’s music is grounded in spontaneity: “Me and Mick went in and had a couple of rehearsals, and I would come up with a beat, he would come up with a riff. I still have a cassette Walkman, believe it or not, and we’d put it down on that. It wasn’t even a full song. We’d just put down a bunch of ideas. When it came to recording we’d lay down the basic tracks and work out different things, and a lot of it was made up on the spot. It really is a great collaboration.”

Recorded and engineered by Mark C. of Live Skull at his studio, Summer Forever and Ever finds Powers playing piano and the Kaoss touch-pad effects unit and Collins playing synthesizer, in addition to their usual instruments. The album reflects the same eclectic mix of musical styles heard on the debut. References and sometimes even direct quotes from sources as diverse as the Andrea True Connection, Captain Beefheart, the Count Five, and Eurythmics leap out of the speakers.

“My biggest influence is beatnik poetry,” says Powers. “Bob comes from the no wave scene. Mick is an incredible source of all kinds of very strange musical information. We all have library cards and we read. We listen to all kinds of things. Our thing is garage rock, and to be a good garage rocker you have to be informed by many other things, or else you’re just nostalgia.

“It’s a great band,” he adds. “It’s fun, it’s playful, it’s kooky and arty and rock ’n’ roll. It contains all those parts of us. We all share in the lyrics and the vocals, so it’s very much a mind-meld and a group effort.”

Bandcamp Daily  your guide to the world of Bandcamp